He said all the forest department personnel who would be injured in the forest protection would be rewarded while those accused of assisting in forest occupation would be given exemplary punishment. The government will succeed in restoring the forest land with the tireless cooperation of all concerned.

The Minister of Environment and Forests said this while addressing a discussion meeting organized by the Forest Department on the occasion of International Forest Day-2021 on Sunday (March 21) under the theme “Forest Restoration: Path to Transition and Welfare”.

The forest minister said a significant portion of the 1,36,713 acres of reserved forest land, which had been forcibly occupied for various reasons, has already been vacated. He said the amount of tree resources in the Sundarbans has increased as a result of various effective measures taken by the present government. According to the National Forest Survey published in 2019, the total carbon reserves in the Sundarbans are 139 million tons, compared to 106 million tons in the 2009 survey. 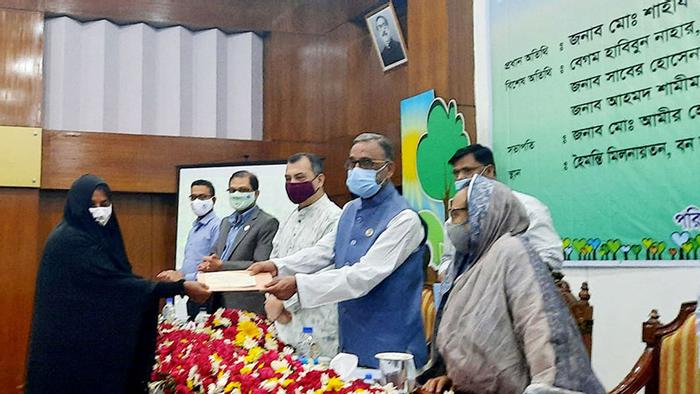 The Forest Minister said the present government has strengthened the existing forest conservation and afforestation activities of the country with the aim of building a prosperous Bangladesh through people’s participation following the initiative of Father of the Nation Bangabandhu Sheikh Mujibur Rahman in tree planting. “On the golden jubilee of independence, we call on all to work together for sustainable environment and forest development and for building a beautiful habitable world for future generations by tackling the scourge of climate change,” he said.

At the meeting, Deputy Minister for Environment, Forests and Climate Change Begum Habibun Nahar said her ministry was discouraging deforestation and construction of forest facilities in the name of development. She paid tribute to the forest workers killed in forest protection and said the government had succeeded in clearing illegal forest lands.

Saber Hossain Chowdhury, chairman of the parliamentary standing committee on the Ministry of Environment, Forests and Climate Change, said even an inch of forest land would not be kept in a state of encroachment. To this end, the contribution of the officials of the forest department will be evaluated, he said.

A check of Tk 15 lakh was distributed among 5 beneficiaries of social forestry.(‘Forests will be cleared of illegal occupation at any cost’)