He expressed this concern in response to a question while talking to reporters at the Secretariat on Sunday.

In this regard, the Home Minister said, “You have seen before that there are some militant organizations. This includes helpers. Something invisible to Jamaat-e-Islami … When we pull the strings, we see that the leaders of these militant groups have been leaders of Jamaat-e-Islami before. Say Harkatul Jihad, say Ansar Ullah Bangla Team, whatever you say, all the main leadership has come ….. from Jamaat-Shibir. ‘ 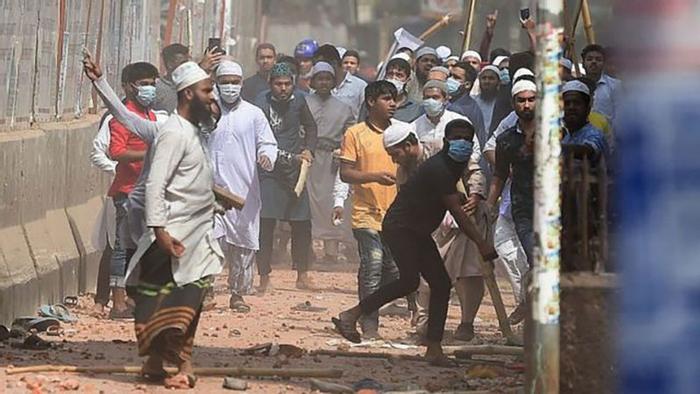 In response to another question, he said, the government is not flexible, it is just showing patience. The security forces are dealing with extreme patience.

But he also warned that this situation will not exist anymore.

The home minister said orphans and small children were being used as shields. These are the ones who are suffering. Tensions are being created by creating rumors and broadcasting live through social media. If these are not stopped, legal action will be taken. These unreasonable behaviors are not desirable.

There were also incidents of arson in houses and government establishments at various places in Brahmanbaria.

Asked if Hefazat was the only one carrying out violence in different places, or whether there was someone else behind it, the Home Minister said, “Look, it could be. It seems to me that their war tactics … the bamboo fort is involved, it seems here, it is clear, these may be the militant groups that have tried to create anarchy in the past, they seem to be involved again in a new way. . We are looking into everything. We will not spare anyone wherever they are. ‘

The minister further said, “Over the last two days, some unruly individuals and groups have destroyed government property in Chittagong’s Hathazari, Brahmanbaria Sadar, Sarail and Ashuganj upazilas in a religious frenzy. Among them, Upazila Parishad, Thana Bhaban, government land office, police outpost, railway station and houses of politicians and human resources have been damaged.

The Home Minister called for an end to all forms of disorderly conduct, including such national losses. Otherwise, the government will take a strict stand to protect the lives and property of the people.

Meanwhile, a press statement will be issued by the government on the situation, said the public relations officer of the Ministry of Home Affairs. Sharif Mahmood.

Police clashed with students at a madrassa in Chittagong’s Hathazari on Friday afternoon in protest of an attack on anti-Modi protests in Dhaka. Four people were killed in the firing. Students of the madrasa in Brahmanbaria staged a protest that afternoon. He attacked and set fire to various installations including the railway station. One person was killed in the clash. Clashes broke out at three places in Brahmanbaria on Saturday over a protest called by Hefazat-e-Islam. Five people were shot dead in these incidents.

Hefazat-e-Islam has called for a morning-evening strike across the country today in protest of the ‘attack and killing of protesting worshipers’. There has also been violence surrounding the strike.